Human is in a sad state. Losing Lucy has hit her hard. So what does she do? She allows one of her human friends to bring her FOUR new chicks! I know this because she put me in their cage. I would not have any of it and pecked each one soundly on their little fuzzy heads! 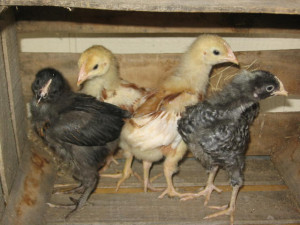 Rosa and the "blonds" are sex-linked types. The blonds will end up like Carol, rather reddish. Rosa will be mostly black with some reddish coloring. Kate is a Barred Rock and will continue to develop black and white stripes.

I have the duty to take over for Lucy. Two weeks ago Lucy fell off the perch, or was she pushed? At any rate she rather lost herself. Human says the word "stroke". Zena and Carmen started beating up on poor lost Lucy so Human took her into her coop. Although Human tried to keep Lucy fed and hydrated, Lucy would have no part of it. Human let Nature take its course. Today Human put Lucy out in the veg garden so that her last hours could be where she so enjoyed bug and seed hunting. 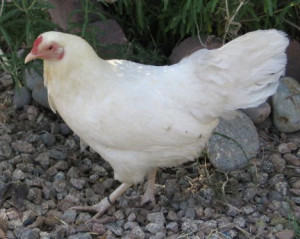 It has been over a year since Human spoke for the hens. In that time she lost her lovely Baker. 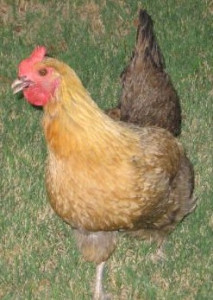 Three hens in one year was too much and while she didn't exactly ignore us, things just haven't been the same.

The weather is normal for the desert, hot! Human turns on the mister for us which makes the dirt wet and thus cool. But really, we do not like our feathers to be wet! We all had a good breakfast of layer pellets, grapes and lettuce.

Another of the flock has left us. Dear Carol was about a year and a half old. Her feathers have been looking ragged of late and a few of her eggs had very thin shells. Human had come out to check on the mister and found Carol passed, Baker standing guard next to her. Human gathered Carol up in a clean towel and buried her with the aloes next to the house.

There are just 5 of us now, Emma, Zena, Baker, Carmen and myself. My human has been most remiss about keeping you updated. I shall rake my talons across her arm at the very next opportunity!

The flock enjoyed a wonderful winter of foraging in the yard. We survived a very cold few days in February. While we were enjoying the dormant lawn, we dug deep into the soil, taking long dust baths in the dry dirt. Human was not happy about the craters we created and her solution? Build a tall wire fence and put us behind it! No more free range in the whole yard but a smaller portion of the side yard by our coop. Emma flew over the fence several times prompting Human to cover the area with a very fine mesh screen. We are none too thrilled about this change and Zena especially squawks loudly every morning. Human jokes calling it Poultry Prison.

May 1st marked the anniversary of my coming into Human's life. 10 years we have been together. A milestone for me, being an old hen, a VERY old hen! I still lay a few eggs now and again.

On a sad note I must report that today Brigid passed away. Human found her this afternoon, stiff and lifeless in our coop. The cause of death is unknown, Human would not preform any kind of invasive cutting to see inside our Brigid. Instead Human wrapped her body in a clean towel and buried her in the madder patch. Human has done it again! She has adopted yet another hen. The new one, Carmen, is a Blue Andalusian. She and Brigid were nest mates, part of a 4-H project that out grew its space. After just a few days Carmen has learned that Human is the provider of all things tasty, well at least those we don't have to find ourselves. She has discovered that bananas are ok to eat but does not care for cabbage.

Last night Carmen went into the coop first and grabbed MY favorite part of the perch! The nerve of her, I mean really, she is at the bottom of the pecking order after all! Carmen sits in the pine tree so the rest of us won't chase her!

Well, I have not gone anywhere! It has been a long and very hot summer and my Human hibernated through it in the cool comfort of her coop while we hens toughed it out! Human came out each morning to give us water and food; once in a while she would turn on the mister which only made our feathers wet. She is the one who feels cooler with mist. For hens standing in water helps or digging into some shady dirt.

Summer is over and the cooler days brings Human out to our yard. She putters in her veg garden, mows the lawn and gives us treats like Armenian cucumbers, watermelon, apples and lettuce. Dog follows her around hoping for some of our snacks. That Dog also chases us if we managed to get a crust of bread, but she does not hurt us.

Yesterday Human took in another hen. Brigid is a Barnevelder about the same age as Baker and Carol. As it happens, Human's friend who gave us Baker and those Buff roosters that got traded in for Carol, had Brigid at the garden at her work and the Boss said the chicken flock had to be pared down so Human took Brigid.

This morning Brigid thought it a good idea to establish her place in the pecking order so she attacked Emma, the smallest and as it happens, the cockiest fighter of the flock. Many brown Brigid feathers littered the lawn! Zena got into it later as Brigid was trying to eat from the communal feed dish. Human set out separate food and water dishes so Brigid would not starve. Like any hen in this yard would starve! Human has such a soft heart for us that she will coddle this new one until Brigid feels part of the flock. It is summer again which means I don't see much of Human. Pre-dawn, before the sun is very high in the sky, maybe mid-afternoon to fill the water bowls then evening when the sun goes down. Human stays in her coop and leaves us to find a shady respite from the desert heat.

Those cute little Buff Oprington chicks that Human doted over all spring grew up to be huge randy roosters! Both "Jane" and "Nora" tried to have their way with each of us hens. It was a totally new experience for us and none cared much to have it happen. Poor Emma was nearly crushed by the brutes! Zena was the one they went for the most and she would have nothing to do with them. The squawking was awful! Then there was the morning crows. Gad it was annoying!

Good Human pushed all three of the fellas into Dog's cage and took them away, returning with a Red Star Sex-link hen now named Carol. Quite a trade in: 3 19 week old roosters for a laying hen! Because Carol came from a breeder whose coop was less than sanitary, Human gave her a bath, hoping that Dawn dish soap would kill any body pests that Carol may be harboring.

Zena and Emma have done a fine job of chasing Carol around the yard, keeping her in her place at the bottom of the pecking order. I'll leave them to it. Baker, the last of this spring's batch of chicks appears to about to lay her first egg. She seems oblivious of Carol, as is Dog.

Poor Carol has never been allowed to forage so she's learning. As is Human's way, she is cosseting Carol with daily lap time so that after 3 days, this new hen has bonded with Human.

Interesting Chicken Fact
Sex-links are cross-bred chickens whose color at hatching is differentiated by sex, making chick sexing an easier process. Sex-links come in many varieties, few of which are a true breed. One common variety is the Red sex-link (also called Red Stars). Red sex-links are a cross between a Rhode Island Red or New Hampshire rooster and a White Rock, Silver Laced Wyandotte, Rhode Island White or Delaware hen.

The peaches are getting ripe and we are having a feast! Human picked a bucket full of peaches but we can still reach some of the lower fruit.

Jane attacked Dog again this morning. Human was outside but did not see the altercation. Dog grr-grr's at Jane warning her away. I don't think Jane understands that Dog could eat her!

The 4 chicks are bigger than I am now. They are always hungry. Lately when they got tired of peaches they have headed to the grape vines.

Human remembers things she must feel are important. It was 7 years ago that she adopted me into her yard. She figures I was at least a year old at that time making me an 8 year old hen. Sure I don't lay as many eggs these days but I do my share. And I am the matriarch of a fine group of hens and chicks. Keeping everyone in their proper place is quite a job but Emma helps.

So in honor of this occasion, Human felt it necessary to celebrate with what else, food! She tossed into the yard a large ball like thing that turned out to be turkey sausage wrapped around a hard boiled egg. Zena got most of it but that's ok; she is the major egg producer right now and needs her protein.

Human is out cleaning up the coop. She calls it mining fertilizer. The chemical notation is N-P2O5-K2O, pretty high in the N(itrogen). Human puts our deposits into a pile of old flower clippings and in about 6 months she will harvest the results for the veg garden.

Dog had another run in with Jane. That little chick just runs right up to Dog and nips her on the face, shoulder or butt. Dog growls and does a bit of gnaw-gnawing on whatever part of Jane she comes in contact with. So far no one has been hurt. Human sat for a long while with Jane on her lap talking and stroking, telling Jane to leave Dog alone. Jane didn’t listen and as soon as she hopped down, went right for Dog!

The chicklets are growing fast! They are 10 weeks old. Human still can’t tell if any of them will be girls. We know but we’re not telling!